When the National Report Card, an assessment of educational progress, came out for 2019, the results were not great for Alabama.

Alabama students in fourth and eighth grades lag behind the country in the overall reading and math scores. Worse, average reading scores for Alabama students actually went down from where they were the last time the assessment was done — just two years earlier.

And race and ethnic gaps remain evident in the scores, with white students scoring close to the national average in reading and math, followed by Hispanic and black students, in that order.

Overall, the 2019 results of the National Report Card, a measure of student attainment across the country, show a continued pattern of Alabama students scoring lower than the average at the same grade levels elsewhere in the U.S. 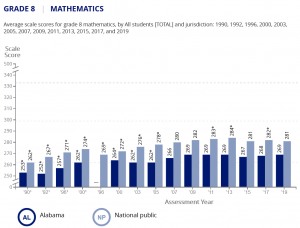 NAEP’s analysis of the Alabama results show that the 2019 math scores, while lower than the nation as a whole, were “not significantly different from their average score[s] in 2017” for either fourth or eighth grades.

In math, Alabama’s fourth grade sore ranks second from the bottom of the list of 18 states (including Puerto Rico and the District of Columbia) that fell below the national average — only Puerto Rico scored lower with a 185 average.

Alabama is among the 17 states or jurisdictions ranking below the national average for eighth graders in math, with only Puerto Rico scoring lower.

Alabama fourth graders’ average reading score of 212, which is below the 2019 national average, was 4 points lower than the Alabama score in 2017, and on par with how students in that grade scored in 1998. The report card shows that 58% of Alabama fourth graders performed at or above the NAEP basic level, which is down from 63% in 2017 — and 56% in 1998 — showing a decline in reading proficiency.

“The percentage of students in Alabama who performed at or above the NAEP Proficient level was 24 percent in 2019. This percentage was lower than that in 2017 (28 percent) and was not significantly different from that in 1998 (22 percent),” the NAEP analysis notes. Although the percentage of Alabama students who performed above the basic level declined from 67% in both 2017 and 1998 to 64 in 2019, NAEP did not consider that “significantly different.”

The reading score for Alabama fourth graders places the state among 12 jurisdictions scoring significantly lower than the national average, with Louisiana, New Mexico and Alaska scoring lower and Puerto Rico’s score not listed. Alabama was one of 15 jurisdictions scoring significantly lower in reading than the national average, ahead of Alaska, New Mexico, the District of Columbia and Puerto Rico (whose score was not listed).

Dividing students into two groups — those eligible for the National School Lunch Program and those who are not — shows how household financial conditions can play a part in school performance.

The NAEP documents gaps between students who qualify for the NSLP and those who don’t.

“Children may be determined ‘categorically eligible’ for free meals through participation in certain Federal Assistance Programs, such as the Supplemental Nutrition Assistance Program, or based on their status as a homeless, migrant, runaway, or foster child,” as noted by the NSLP’s website.

In math, for instance, Alabama fourth grade students who were poorer (based on eligibility for the school lunch program) scored 220, while students whose household incomes were higher scored 243. And while the trend was similar nationally, fourth graders eligible for school lunch across the country scored 229 compared to 253 for those who were not eligible for the program. In both cases, Alabama trailed the nation — with Alabama’s eligible and non-eligible fourth graders scoring lower than their counterparts nationally.

The National Center for Education Statistics (NCES), the organization behind the NAEP, noted in a press release that reading is a nationwide problem in some respects. Declines can be seen in the reading scores of high school seniors as well as fourth and eighth graders. The assessment itself did not report 2019 reading score results broken out by jurisdiction.

“The decline in twelfth-grade reading scores resembles the declines in fourth- and eighth-graders’ reading scores, where we saw the largest declines among the lowest-performing students,” Peggy G. Carr, the associate commissioner of assessment at NCES, said in the press release. “There is an urgent need for research into this phenomenon, which we have now observed in multiple reading assessments, in the NAEP U.S. history assessment, in the NAEP geography assessment, and in some of our international assessments. This pattern of decline concentrated among lower-performing students — across grades and across subjects — is a troubling indication that too many students are falling behind.”

Although NCES registered less alarm over math scores, its assessment showed racial and ethnic disparities — progress for some groups, and a lack of progress for others.

“There were no statistically significant changes from 2015 in the average mathematics score of any racial/ethnic group,” the NCES reported. “Compared to 2005, the first assessment year, scores increased for White, Hispanic, and Asian/Pacific Islander students, as well as for students of two or more races. Scores for Black and American Indian/Alaska Native students were unchanged.”

For more information or to view the report visit http://nationsreportcard.gov/

The Alabama Initiative for Independent Journalism, which publishes BirminghamWatch, joins a record number of 267 nonprofit newsrooms as participants in the national NewsMatch 2020 campaign. This year-end fundraising effort, extending from Nov. 1 to Dec. 31 and supported by national foundations, provides the opportunity to match one-time gifts and new monthly gifts.

According to a statement from the Institute for Nonprofit News, the 35% increase in participants compared to the 2019 NewsMatch campaign reflects the fact that the nonprofit news field continues to grow. In the first nine months of 2020, despite economic downturn and the decline of traditional media outlets, INN has accepted 60 new members, a 25% increase over last year.

INN joins the News Revenue Hub and The Miami Foundation in helping to make this annual giving campaign possible. NewsMatch 2020 is currently supported by Democracy Fund, the John S. and James L. Knight Foundation, the Facebook Journalism Project, the Bernard and Anne Spitzer Charitable Trust, the Inasmuch Foundation, the Independence Public Media Foundation, the Jonathan Logan Family Foundation, the Present Progressive Fund at Schwab Charitable, the S.D. Bechtel, Jr. Foundation, the William & Flora Hewlett Foundation and the Wyncote Foundation. Additional contributions for the matching fund will be accepted through December.

The NewsMatch 2019 campaign turned an initial pool of $3.37 million into a $43.5 million payout to news nonprofits across the country, according to INN. Individual gift caps and overall match caps vary according to the number of participating newsrooms and funders.

Donors who wish to support AIIJ and its publication, BirminghamWatch, can do so at any time. Gifts through Dec. 31 may be matched as part of NewsMatch 2020.